January 29, 2021 – Upland Specialty Insurance Company (USIC) has been assigned a preliminary credit assessment (PCA) of A- by AM Best as it progresses towards an official underwriting launch that is expected to see it first enter the excess transportation space, The Insurer can reveal.

In an interview with this publication, Hart said that Upland will build out its E&S underwriting portfolio across three main pillars, with an initial focus on casualty before adding property and specialty over time.

The first offering is expected to be an excess transportation liability product aimed at the surging demand for coverage in a booming sector of the economy that has benefited from the increase in deliveries associated with online shopping.

The transportation segment had already been in hard market territory before the pandemic amid carrier retrenchment. Upland is also working on a public entity excess casualty offering and is expected to round out its casualty portfolio with general liability products on a primary and excess basis later this year.

Other hires known to have been made by the start-up include Richard Wilson as senior vice president. The executive was most recently senior vice president for excess public entity at Britowned Scion Underwriting based in California. He was also previously at Hallmark, as national practice leader for public entity business. Meanwhile, another former Hallmark employee Krysia Alt has joined as senior underwriter with a background in excess casualty transportation. 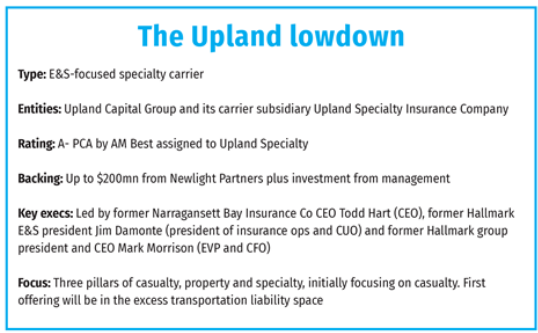 Traditional E&S play
Hart told The Insurer that the focus will be on building underwriting teams in-house rather than working with MGAs or program administrators to access business.He said that teams were currently onboarding and helping build out product lines, while other teams had been identified for the property and specialty pillars to be added later this year.

In the interview, the former NBIC CEO said the start-up had been in the works since 2018, when initial conversations with Damonte took place. And he said that the entry was not purely an opportunistic play based on the current, highly attractive pricing conditions, but a strategic move to build a long-lasting specialty platform.

“Rate conditions are not really the impetus for why we got started. It certainly is extraordinarily helpful, but the way I’d describe it is we have a really good team and we have really good tailwinds and both conditions have to be true,” Hart commented. “The core thing we’re trying to do is build a great company. Obviously the conditions in the market don’t go unnoticed, but we’d have been trying to build the company in this fashion regardless.”

The executive said the aim is to create a traditional E&S carrier with a strong focus on solving customer problems, allied with the advantages of being able to implement modern processes and technology that can be achieved as a start-up without legacy platforms. It will also have a strong focus on data and analytics.

Favourable E&S market
Although Hart played down the significance that the hardening rate environment had in the decision to launch Upland, AM Best highlighted favourable market conditions in its note assigning the PCA to the start-up.It said the PCA of A- financial strength and a- long-term issuer credit considers Upland Specialty’s “excellent” projected risk-adjusted capitalisation.

It also reflects a “sound business strategy, which should position the company to take advantage of current favourable market conditions in the E&S product lines that the company is targeting”
.
The rating agency pointed to the “significant experience” and “solid track record” of the start-up’s management team in the E&S market. “AM Best believes that this experience, and management’s existing relationships with its distribution sources, will be key to the company quickly gaining traction in its targeted markets,” the statement continued.

Newlight is thought to differ from traditional private equity in that the firm invests over time with a flexible approach. It typically looks to partner with founders and management teams to build and grow businesses, providing them with capital and support to execute their plans.